Verti-Block’s genius lies in getting more for less.  Larger blocks that weigh less than solid blocks the same size.  Setting more square footage per day by handling fewer blocks.  By including Verti-Block’s Half-Step block series you now get even more for less.  The Half-Step series includes a 1’x4’x2′ deep corner block that can soften the step down for changes in elevation.  The block is designed to match the original deep texture of in both Canyon Ledge and Cut Sandstone.

The Half-Step series also includes a standard block with a 1′ x 4′ face that’s 3′ deep.  This block has the same dimensional male sheer lugs and female receiver on every block.  This enables the 1’x4′ Half-Step standard block to be conveniently used on the top, bottom or between any course in-between. 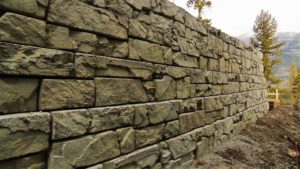 In Lexington Kentucky, the Half-Step series is enhancing this Verti-Block installation at the new DMK Assisted Living Center.  The project, when completed, will include over 14,000 square feet of Verti-Block retaining wall.  The sections vary in height up to 24 feet at the highest point where the wall will include a double-sided Verti-Block parapet wall.  The walls in these taller sections will be reinforced with geogrid to ensure soil stability and the double-sided blocks will be internally linked to provide an impact resistant traffic barrier.