Verti-Block to the Summit

Set alongside the scenic Raisin River, Comstock Park in Adrian, Michigan, is a popular recreation spot for residents. Its stunning water fountains and lush flower gardens provide a beautiful entry into Adrian’s downtown. A failing retaining wall along the banks of the river within the park, however, had not only become an eyesore but also a safety hazard for the city. Built in 1974, the roughly 470-foot-long timber-and-steel-beam wall was deteriorating: the wood planks were beginning to rot, and the wall was tipping. City officials knew it was time to find a solution for this unique retaining wall—which is constantly in contact with water—in Comstock Park.

In early 2012, the city of Adrian contracted with Rowe Professional Services, headquartered in Flint, Michigan, to perform a study of options to replace the ailing wall. The new wall would not only need to be able to handle actively flowing water but also contain the river during high periods of water and ensure the bank’s stability. While several options for the wall were considered, including replacing it with new timber, steel-sheet piling, or cast-in-place concrete, the city opted to use a precast segmental block system, due to its cost-effectiveness, durability, and ease of installation, and asked Rowe to recommend a product. The Verti-Block Retaining Wall System was at the top of Rowe’s list. Based on previous experience with Verti-Block, Rowe was familiar with the stand-out quality of their products and the ingenuity of their engineering. They also knew Verti-Block would provide the longevity and flexibility necessary for this project. 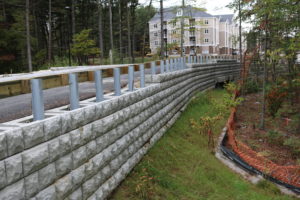 While durability and aesthetics were certainly important to the city of Adrian, the project posed another challenge: constructability. “The site had an actively flowing artesian well, so controlling the water both during and after installation was a real challenge,” says Justin Combs, director of parks and forestry for the city of Adrian and project manager for the Comstock Park project.Combs explains, “We needed to be able to install the wall quickly while the water was being diverted. And since we were dealing with a very tight working area, access for heavy equipment was limited.”

Verti-Block made working quickly and efficiently easy, a key factor because of the running water along the site. Because of its innovative open-core design, Verti-Blocks are bigger than comparable blocks while actually weighing less—allowing for easier handling and reducing installation time. “Once the water was diverted with temporary sheet piling,” explains Combs, “the contractor needed to set the blocks quickly. Verti-Blocks are light enough that a worker can handle them quickly and easily.” And because the work area was so small—constrained between the river and the steep slope of earth—a large excavator wouldn’t fit. “Verti-Block’s lighter weight allowed the contractor to use smaller equipment to set the blocks,” says Combs. “You can also make minor adjustments with a pry bar when necessary rather than having to hook back up to your  lifting equipment,”saving time and money. 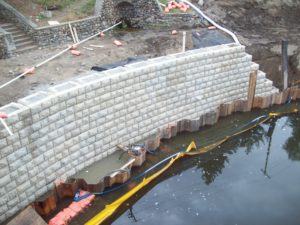 For Rowe, an additional benefit of  Verti-Block’s open-core design was the ability to add gravel fill not only inside the wall but also behind it, a required specification for this project. Unlike solid retaining blocks that only allow for gravel fill behind them, Verti-Block’s open cavities allow gravel fill within the wall itself, increasing drainage and alleviating hydraulic pressure more effectively. What’s more, Verti-Block takes the guesswork out of the gravel-fill process. The cavities within the blocks are filled upon installation, ensuring that the accurate amount of gravel is used every time. “We really liked the ability to fill the blocks with stone,” says Mark Helinski,project manager at Rowe. “It facilitates proper drainage and helped us control the water and the cost of the material.”

The high water table required engineers to design a one-foot tremie concrete base that displaced water as it was poured in place. Rebar dowels were then placed into this concrete foundation, which extended through the center of each Verti-Block on the first course. The first course of Verti-Blocks was then filled with concrete to anchor them to the concrete foundation. “Having the ability to anchor the Verti-Block system to a tremie base was a big factor in our decision to use it,” says Helinski. “Solid retaining blocks just don’t give you that level of flexibility. It really made a difference in how confident we felt in this wall’s foundation and its ability to resist washout.” For additional strength, the wall was also reinforced with geogrid, which was laid between each subsequent block course.

The Comstock Park wall also spanned between two bridges along the Raisin River—one owned by the city, and one owned by Michigan’s Department of Transportation (MDOT). The wall needed to abut the bridges without a rigid connection, which can put stress on the bridge and cause sagging over time. The Verti-Block wall was able to self-support and securely terminate at each bridge abutment with a simple slip plane. This type of connection allowed for some settling in the wall without affecting either bridge. 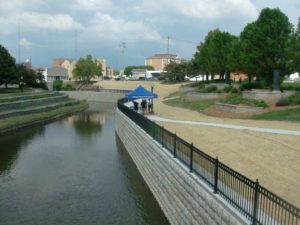 Another complicating factor in the design of the wall was the need to curve with the riverbank. With its tapered ends and unique interlocking system, Verti-Block was able to accommodate concave and convex curves down to a radius as tight as 16 feet, which was more than adequate for the Comstock Park wall. An Attractive Solution

City officials for Adrian liked the natural stone texture Verti-Block offered, but color mattered too. The park had several existing terraced walls that they wanted the retaining wall to match. Verti-Block’s ability to be stained with a penetrating acrylic sealer or integrally colored made it a natural choice for the project. “Many Verti-Block producers around the country stain the wall after it’s installed,” explains Alan Krane, sales engineer for Fabcon Precast, the supplier of Verti-Block for this project. “Fabcon has been pigmenting concrete for years, so we’re able to offer our Verti-Block customers a choice of coloring methods. Given the conditions of this install, the city wanted an integral color in the block, which we were able to match beautifully to the color theme of the park.”

The wall was completed in the spring of 2013. Adrian City officials are pleased with the final look and design because the residents are thrilled with it. “We get compliments on the wall all the time,” says Combs. “Residents love the way it looks.” And for Rowe, working with Verti-Block through Fabcon made a difficult project an easy and successful endeavor. “Both Verti-Block and Fabcon provided top-notch engineering,” says Helinski. “For this application, we needed to think outside the box, and the Verti-Block system allowed us to do that. The expert engineering support and quick turnaround time provided by Verti-Block’s local producer, Fabcon, ensured a successful outcome for us and for the city of Adrian.” With its new retaining wall in place, Comstock Park now offers residents a place to relax and play that’s even more beautiful—and safer—than before. 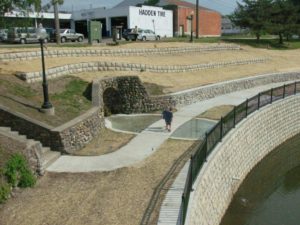 Verti-Block to the Summit